The Things We Get Excited About!

While Jay was training before basketball tonight I popped over to Coles to grab a few things. On one of the ends they had a heap of Decor storage containers for half price. Supposedly it was in the catalogue, but I missed it.

For ages I have been coveting the tupperware pantry containers. I recall seeing Toni and Hannah's pantry shelves with lots of beautiful tupperware containers with all their food all organised and looking beautiful. For years I have wished our pantry was as organised. Even when Becky was selling tupperware and offering me a discount, I still couldn't justify spending so much money on the containers though. I'm not the kind of person that can just buy one or two things and then get more later - its either now or never!

However I thought that I should grab a few containers as they were so cheap and start organising my pantry a bit more. When I picked up Aaron from work I was excited to show him what I had got. When we got home I started to put some of our food in the containers and the bug hit me!! I was so excited that they looked so nice, that I just had to go back and get some more! I just can't leave such a good bargain in the shop - especially when I have been wanting to get organised for so long.

It started off as 4 containers, and it has ended up with this!! No wonder I am blogging at 11 pm - all night was spent taking everything out of their old containers and putting them into the new ones. 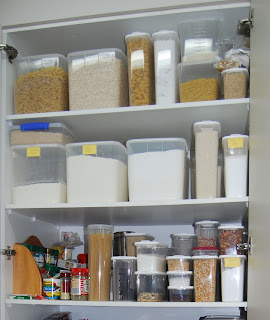 The funniest thing though was that when I went back to Coles to stock up on more I saw the Bailey's van in the car park. Anyone who knows Kylie, knows that she is the shopping queen! She loves a good bargain. I go straight to the section where the containers were and of course Kylie and Elise are there with their trolley full of containers! She had also bought some earlier (supposedly a trolley load!) and had come back for more too! I couldn't stop laughing as she was as excited as me!!

We were ooohing and aaahing over all the different size containers and talking about what we could put into which container. I think we both just about bought out the shop, but I'm so happy to finally have my pantry organised - only took me 13 years! At least it gave Aaron some entertainment for the night - he couldn't stop laughing at me as I kept getting so excited saying 'I'm pumped!'. The silly things we get excited about! 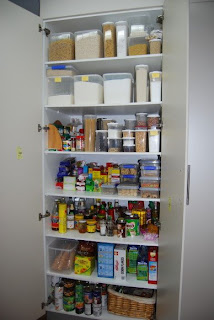