Over the past 6 months Noah has developed a really bad problem with his secretions. Years ago he had trouble with his saliva and got really dribbly but a med quickly fixed that up. He is still on the same med, but it isn't helping anymore. At first we thought it was an Autumn thing, then a Winter thing and now a Spring thing, but it is looking more and more like it may be something Noah has to deal with all the time now. We have to suction him every day and his aides and teachers at school have also been trained to suction him at school when needed.

I often see kids with special needs with bandannas on to catch the dribble. I always felt lucky that Noah hasn't had to have one, but more and more we are finding we are taking little towels every where we go. I finally gave in and went and bought a heap of Canteen bandannas. It saves a lot of mess on his clothes. I have to say it doesn't look as bad as I thought. 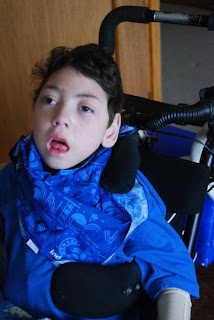 He has a lot of thick white secretions sitting at the back of his throat all the time which are hard for him to cough up. Every day now we have to give him four lots of nebs as he has tested positive for a nasty bug that is very resistant to treatment. After two of the nebs he has to have postural drainage done. This is where you do lots of cupping and vibrations on his back and chest while he is laying on his side, to try to loosen anything in his lungs which he will then hopefully cough up. I'm finding it very hard to find the time to fit this all in - especially before school in the morning, with trying to get all four boys ready and Noah's new splints on, so we have now arranged that he will have a neb at school as well as postural drainage which is great.

Don't worry - this pic was taken back in September. He isn't like Aaron who is still wearing his Hawks gear! 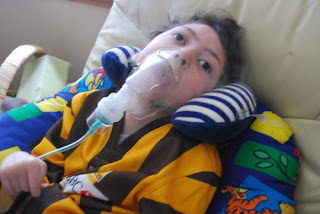 Di is still out of action with her broken arm, but Noah's special school has agreed that Noah can go to school there full time until Di can use her arm fully again. Di is going to school with him, but they have an extra aide there helping out Di with all the physical stuff, while Di is teaching them all the things they need to know about Noah - suctioning, meds, feeds, postural drainage, nebs, toileting (that is a whole other blog post! Noah has some interesting toileting needs!). So far it is going great. The school has been fantastic in trying to get Noah involved in lots of different things such as using the sensory room.

Yesterday afternoon I got a phone call from the lady who works in the office there. She said she sees me 'struggle' (I thought I was doing well!! Maybe Kobe trying to wriggle out of my arms was the cruncher!) in each morning with all of Noah's gear plus the three boys (Jalen has decided he likes walking to school rather than being late each day) and asked me if I was interested in Noah catching the bus to school. Most of the other kids that go there are picked up by a bus each morning that is fitted out for wheelchairs. It picks them straight up from their home. She said while Noah is going there full time it's no drama to arrange for him to catch the bus. This morning was his first time! The school is literally two blocks from our house, but it was soooo nice just having to walk him out the front door this morning, rather than loading him up into the van with the other two boys and all his gear. I believe that the woman on the bus in a registered nurse. 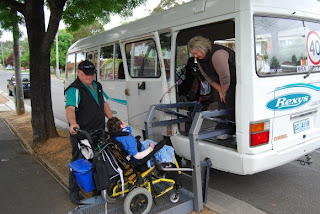 I am so jealous of their automatic lift. I'm grateful for our ramps that we have and that we don't have to get Noah out of his chair to get into the van, but boy one of these would be great!! Maybe one day. 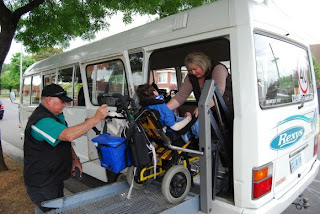 It's nice to know that the mornings won't be as rushed from now on. In some ways I'm hoping Di's arm doesn't heal too fast!! 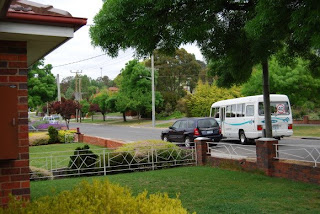