Home of the Brown and Gold - Kobe's TV moment

A couple of months ago I took Kobe along to the Hawthorn Football Club Family Day.  He had a great time meeting some of the players, and having a kick of the footy.  He was dressed up in his Hawks geurnsey and was actually kicking really well and was getting a lot of goals.

A guy who was videoing came over to us, and asked if it would be okay to video him kicking for the goal as he was making a promotional video for the club, which would also be to promote Tasmania and would be shown on the big screens at the games.

Kobe was so excited to see himself, and I love that his tongue is sticking out as he concentrates (just like my Mum!).   The ad is also being shown on TV at the moment.  The version I've been able to download hasn't got any sound though.

While catching up on some blog posts, I realised I hadn't posted any of my recent 1 Second Everyday videos.   It's still by far my favourite app and I find I don't even have to think about videoing every day, as I just do it naturally anyway as I just love capturing things anyway.

I never know how my month is going to turn out, and it's fun to watch the video at the end of the month and be reminded what we got up to.  I love that the big and little things just come together in such a fun way.

These videos show one second from every day in March, April and May.

Kobe has so much enthusiasm for life and has been over the top excited about his 10th birthday, which was last week.  I'm not a fan of having birthday parties regularly (or at all) but for about 6 months Kobe kept telling me all the ideas he had for his 10th birthday. I reminded him that we don't do parties every year,  but because it's an extra special birthday (being double digits) I agreed that he could have a party with friends this year.

His birthday was last Monday, so we had his party over the weekend as we knew we would be busy after school on his birthday. He was so happy to invite 9 of his good friends from school to play laser tag.  He loved having Jay, Harri and Erin play with them as well. 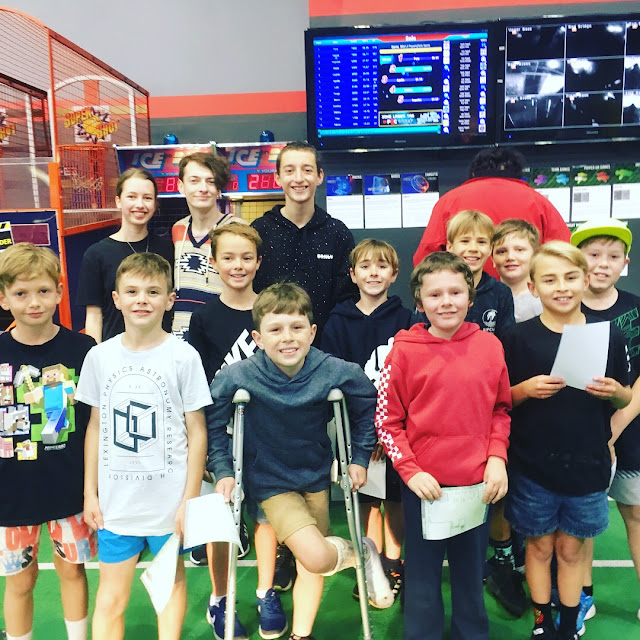 He was very spoilt by his friends and got some lovely gifts. 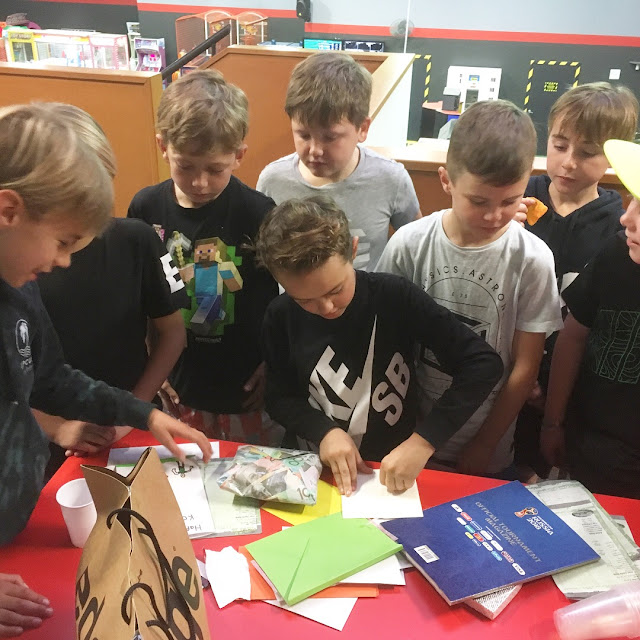 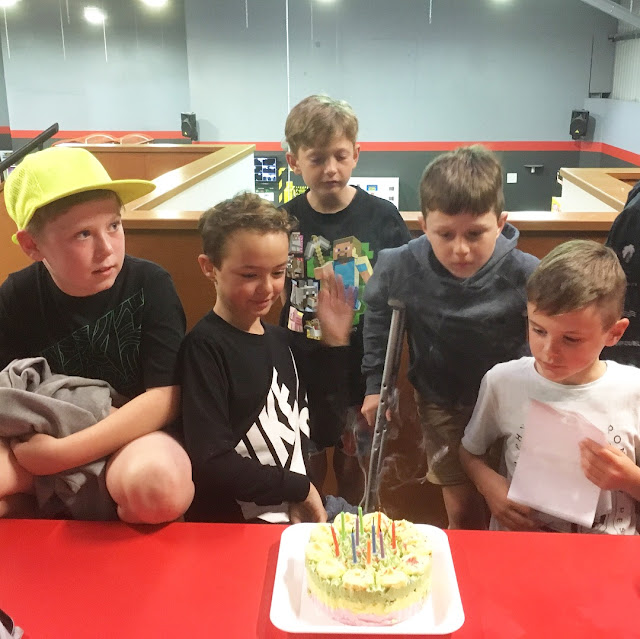 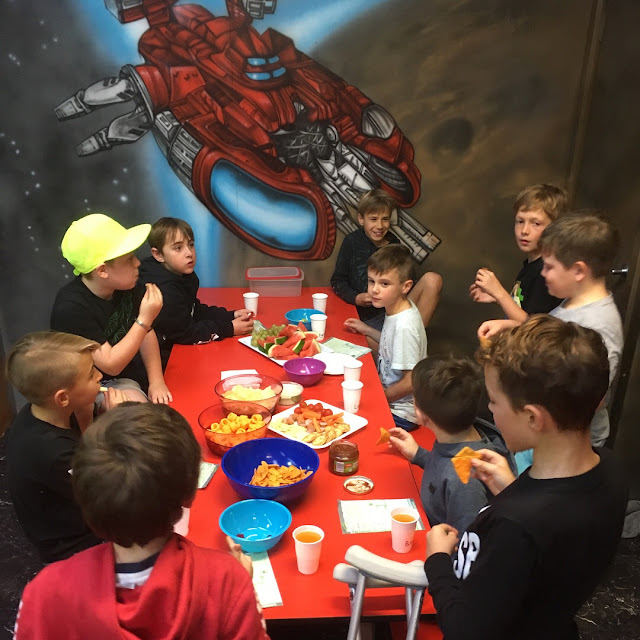 Kobe actually slept in on the morning of his birthday, and I ended up having to wake him up to open his presents before school.  He had a birthday list of things to do with basketball, such as a bag to carry his basketball gear to games, a new ball and Nike slides (like sandals).

He was very happy to get a lot of things from his list, and I also surprised him with Taylor Swift concert tickets for later in the year. He was so excited, and sat in shock for a few seconds as it sunk in. He had been asking me for a while if we could go and see her, and I kept saying no (even though I had bought the tickets months ago). 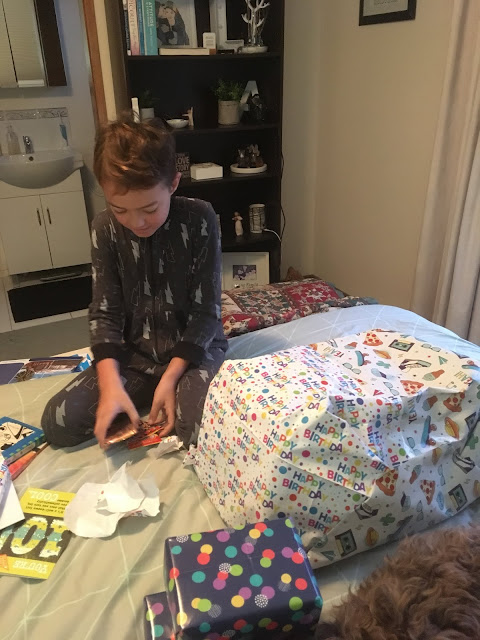 He tried to convince me that he deserved a day off school for his birthday, but that's a bit tricky when I'm a teacher so he went off to school with treats to share with his class.  After school we went to pick up Jay from work and he was excited to choose a  special birthday treat. ﻿ 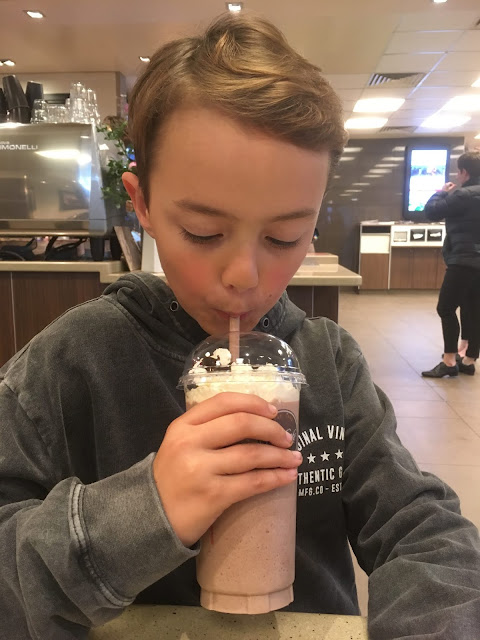 We then had to go and watch Harri play basketball, and then after the game he chose to go to Hogs Breath for tea with Tim and Helene and their kids. 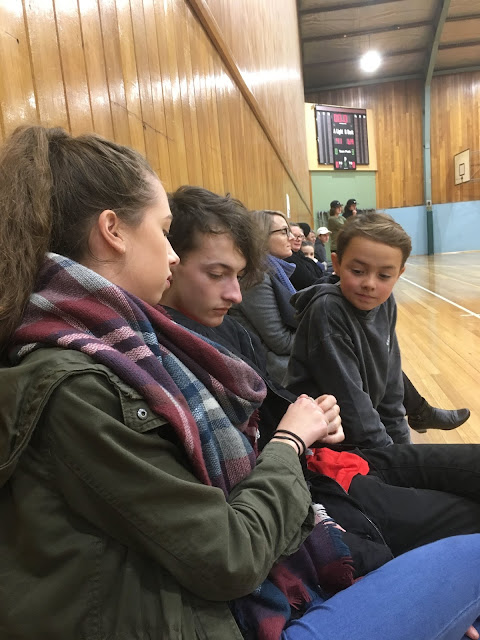 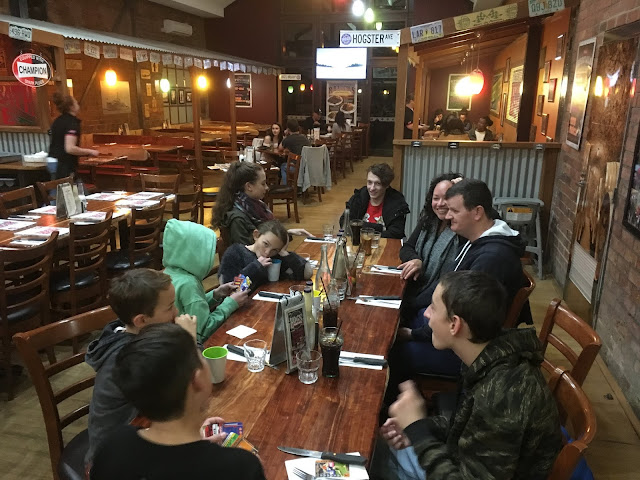 Kobe and Ardie are so cute together.  Kobe always says how much he loves Ardie because he's so much fun to be around.  It was lovely to spend his birthday with them. It's actually hard to believe that Kobe is now 10. He's lived more than two thirds of his life without his Dad and last night he said 'I wonder what life would be like if Dad were here'. I have no doubt that Aaron would be proud of him, and that he would also make him laugh and drive him mad at the same time.

He's the funniest kid and has such an attitude at times.  He's very different to how Jay and Harri were when they were his age, as he always has to have the last word.  It's lucky he's cute! We are so glad decided to take that leap of faith and have one more baby.  Kobe brought so much joy into our lives when he was born, and I'll never forget how excited Aaron was when he was born.  I still treasure the blog post Aaron did on the day he was born.  We love you Kobe.
Posted by The Kings at 17:00 No comments:

Celebrations such as birthdays and Mother's Day can be really hard when it reminds you even more of what you're missing.  Over the past six years I've really dreaded these days at times, but this year I wasn't too worried about Mother's day for the first time.  I don't know if it's just a time thing, but it was nice to not feel so anxious and sad about it coming up.

For the first time since Aaron died the boys really made a special effort by themselves, for me.  I don't even care about the presents or fuss of Mother's Day at all, but it was so lovely that the boys all spent their own money and went shopping on their own this year.

Kobe was so cute and was the first one awake and came in with some flowers which he had made me at school. 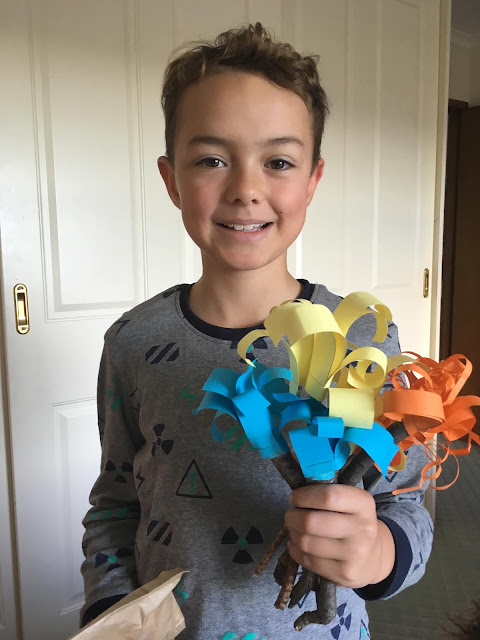 The boys did so well with choosing things that they knew I would love.  I was very spoilt and the loveliest thing was a beautiful card which Harri made and wrote in for me. He said some beautiful things about how much I had done for him since Aaron died and it meant more to me than anything else. 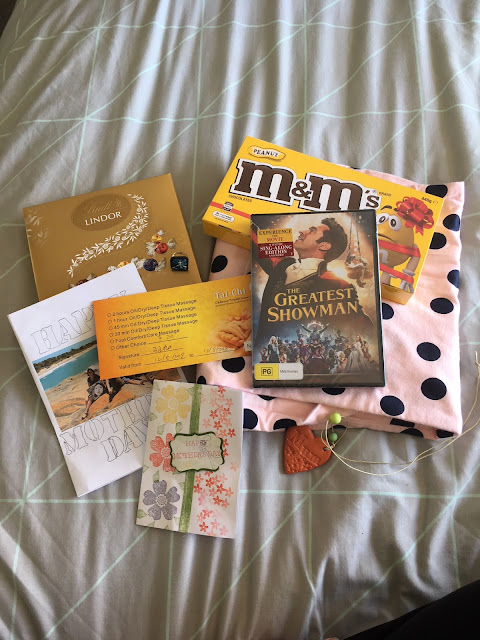 We drove out to Mum's on Mother's day and made lunch for her.  Chrish and I surprised her with a canvas of the whole family together, which she loved.  It's a pity the photo was taken just before my new niece Bridey was born, as we'll have to update it and aren't sure how long it will be until the whole family is together again.   It's a special photo though, as it's not very often we are all together anymore. 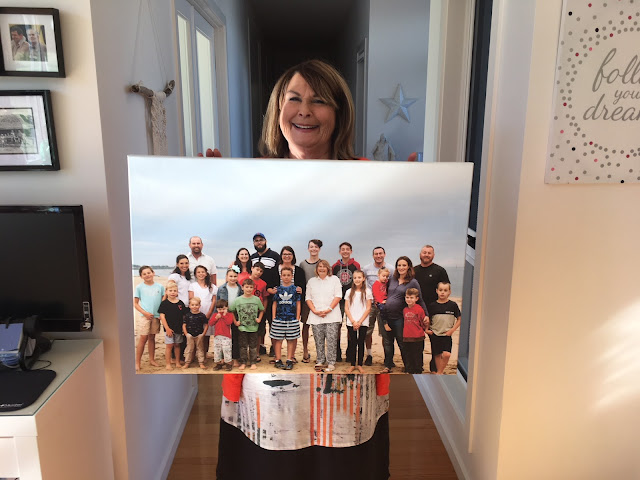 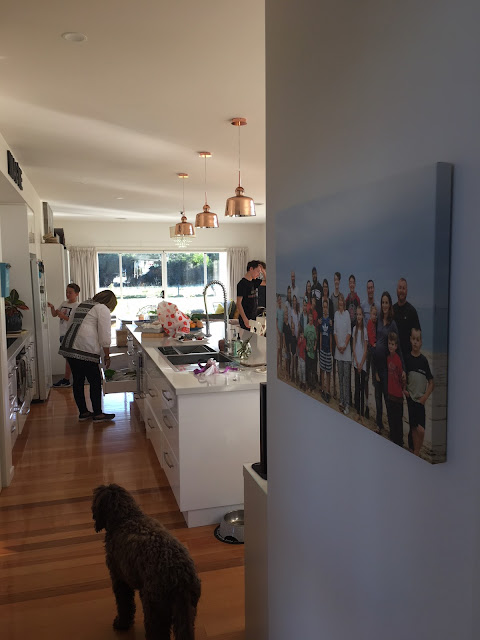 It was a beautiful autumn day, so after lunch we headed for a kick of the footy on the beach, and let the dogs go for a run. It was such a lovely day. 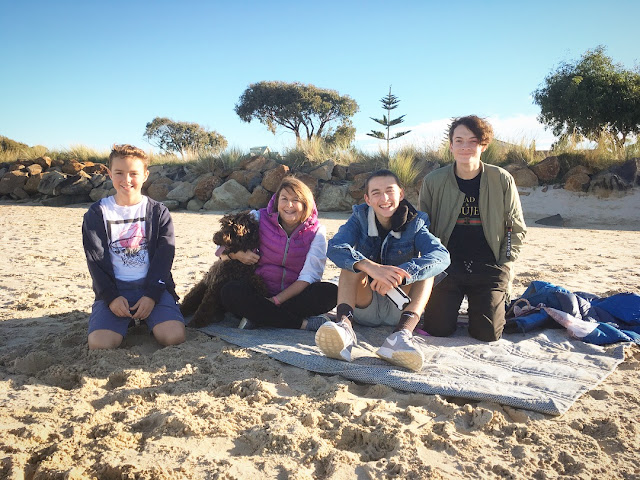 I'm grateful to be a Mum to four boys, and to have these three to keep me going.  I love them so much, and am lucky to have such great boys. 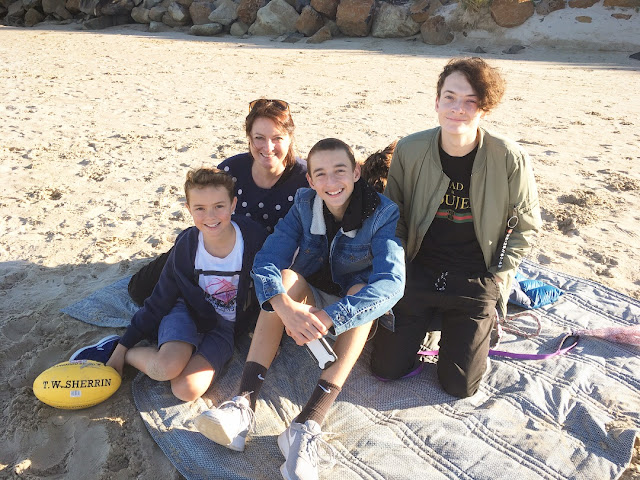 It was lovely to be able to have a relaxing day with my own Mum.  It was really nice to not feel so sad on Mother's Day this year.  ﻿ 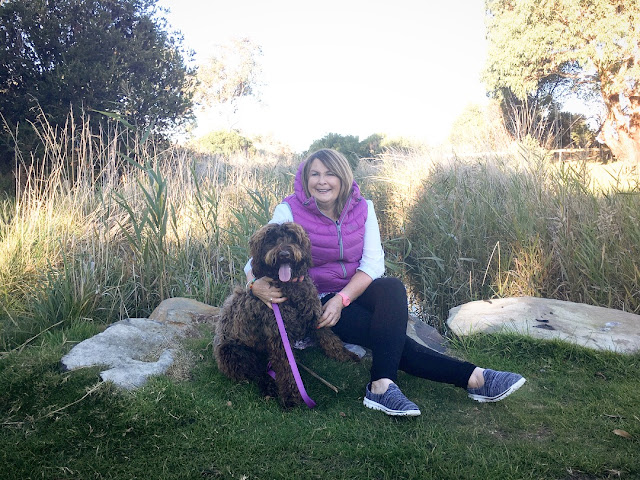