Today was a good day for me - it was the start of the season of 'Stalk-a-Hawk' for the Kings.  It's good because it means that cricket season is just about over and footy season is about to begin. I used to hate footy but now I actually enjoy it, and it is much more exciting than the cricket.

As for Aaron - he LOVES the footy, but last week he was saying he was dreading knowing that the Hawks were going to be in town, as it meant there was only one more week after this one of school holidays left.  Today the Hawks started their Community Camps in Tasmania, so we headed up to see them at the Prospect Hawks Fun Day.  There were different sporting activities set up for the kids to play, and the players mingled with the kids and got involved.  Kobe spent ages trying to throw a frisbee into a bucket. 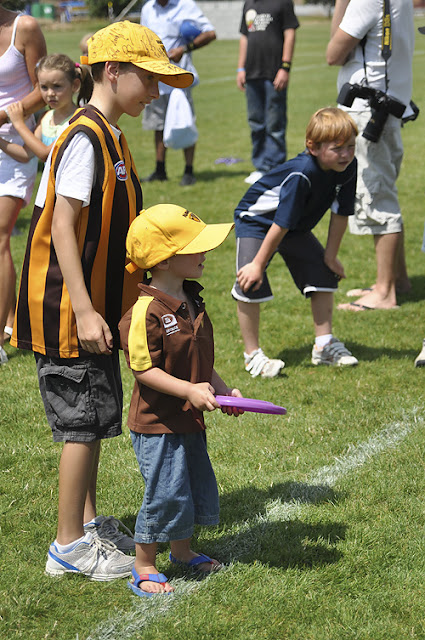 There was a huge line up of kids to have a go, but he charmed his way with the girls running it and they would let him have a few throws in a row.  I was telling him to have one turn and go to the back of the line when the girl said to me 'how can you not let him have another go, when he's so cute!?'. 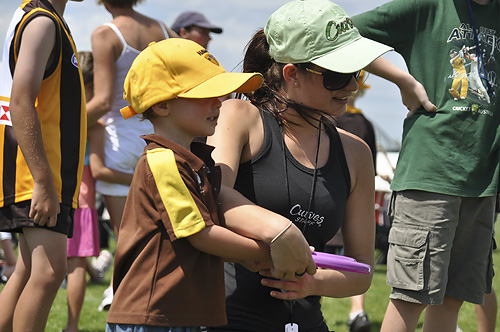 All afternoon he was charming all the women! 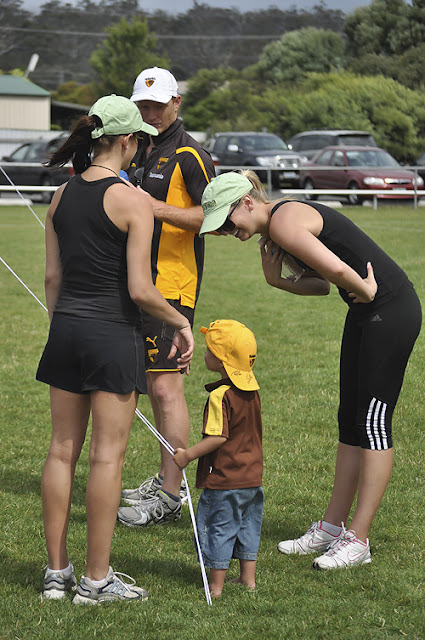 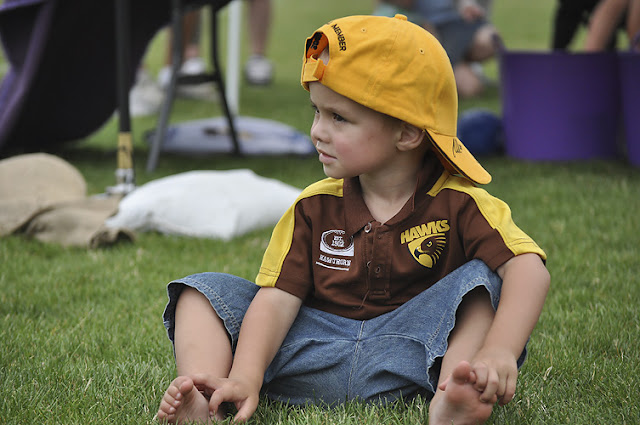 It was fun watching the players get involved with activities with the kids. 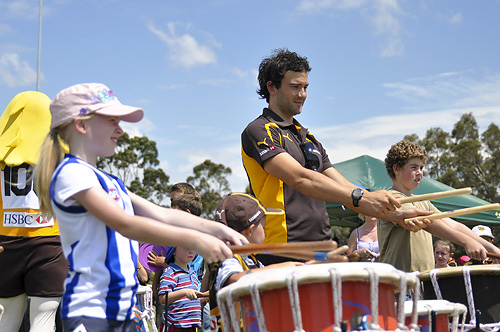 They were all really lovely and took time to say hi, especially to Noah (who slept most of the time because it was so hot). 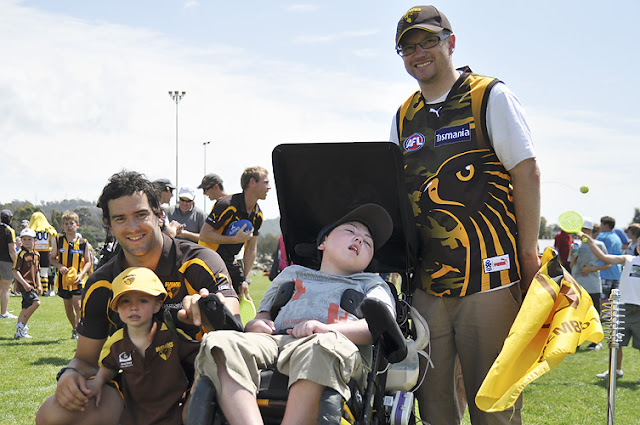 Twice during the afternoon the players would stand in a group and take questions from the kids.   Jalen put up his hand and asked if they were happy that Campbell Brown went to play for the Gold Coast.   They all cracked up and Sam Mitchell said 'we are happy for Browny, he was offered a lot of money so good on him, and they have nice weather up there, and we have good players to replace him' as he pointed to the new player who will be taking his place. 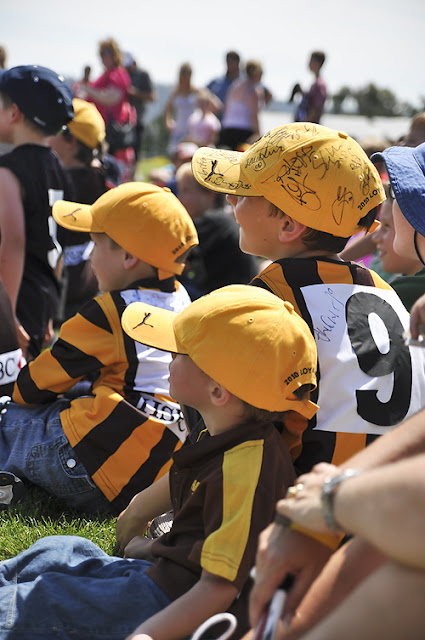 After they would answer questions, the players then spent time signing things.  I kept telling Kobe to move away after Aaron and the other boys got their things signed and he was so upset and kept saying 'hat, hat!', as he wanted them to sign his hat.  He was happy once they did. 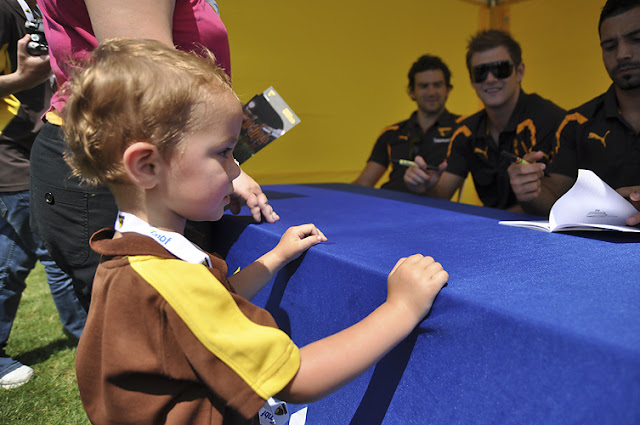 There were a few new players who are playing with Hawthorn for the first time.  Hopefully one or two of them will be the next Buddy :) 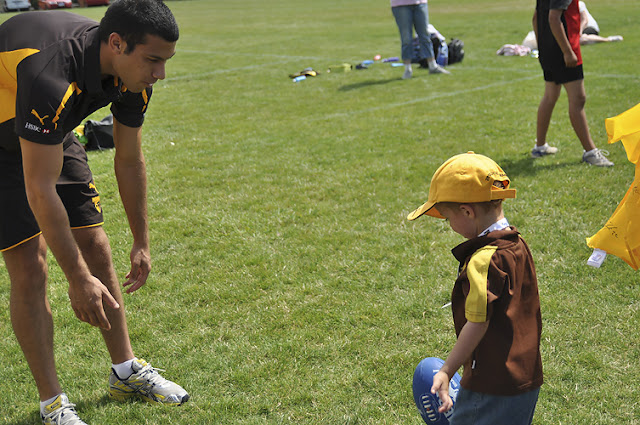 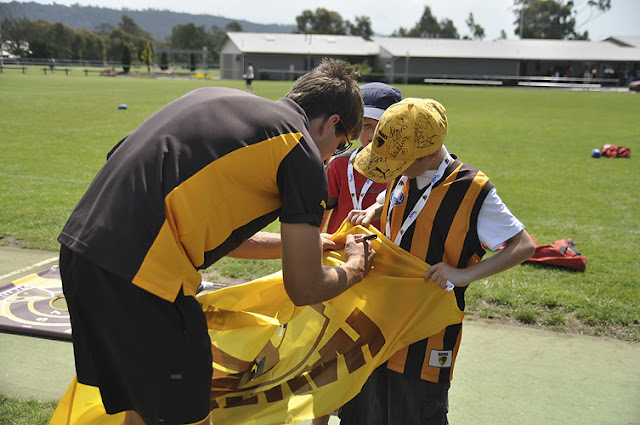 We hardly saw Harri all afternoon, as he just spent time playing cricket with a group of boys he didn't know.  I went over to watch him and take photos, and then all of a sudden a few of the players came over to play with the kids. Harri loved facing balls from Sam Mitchell and Grant Birchall.   He was yelling out to Sam all the time saying funny things like 'Sam Mitchell!!!! You don't bowl a football, you are supposed to bowl a cricket ball!', as Sam threw a footy for a joke.  Every time he would talk to him he would call him 'Sam Mitchell!' which was cracking me up. 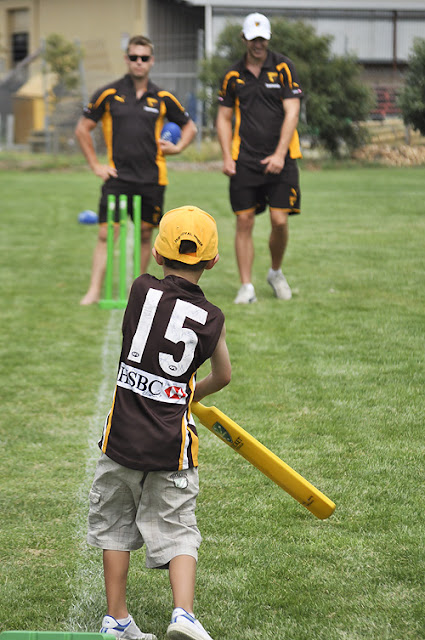 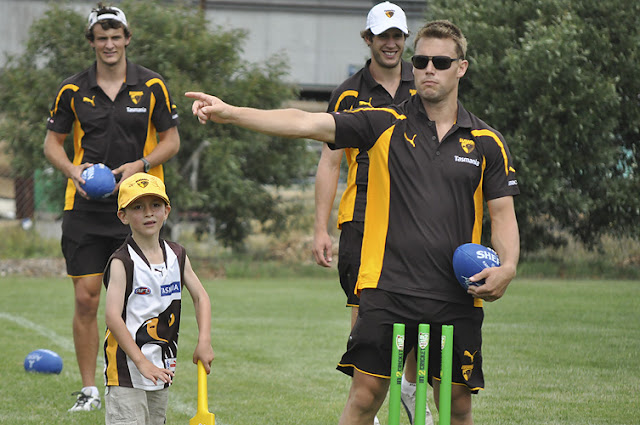 Sam was giving it back to Harri all the time which was hilarious. 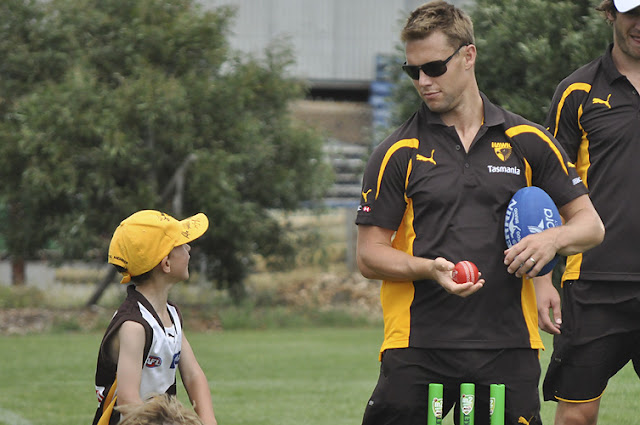 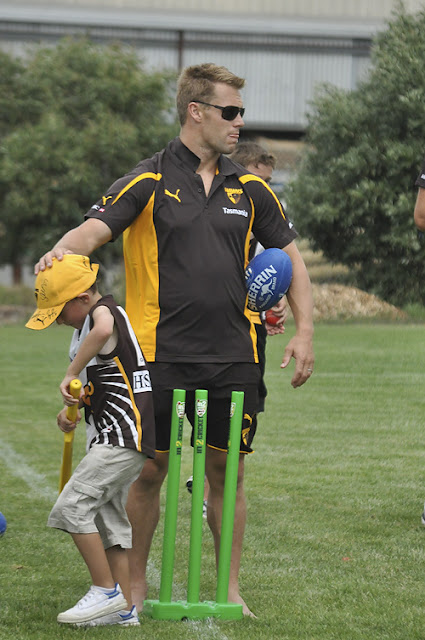 When Aaron went up to the table to get something signed, Sam noticed Noah and asked Aaron if he would like him to come out and get a photo taken with him, which we thought was really lovely. As soon as he saw Noah he said 'I think I've seen this little man a few times' and we said he had and then told him that 'the crazy kid that was playing cricket with you is our son too' and he laughed and goes 'he was funny!!'. That's one way to describe Harri! 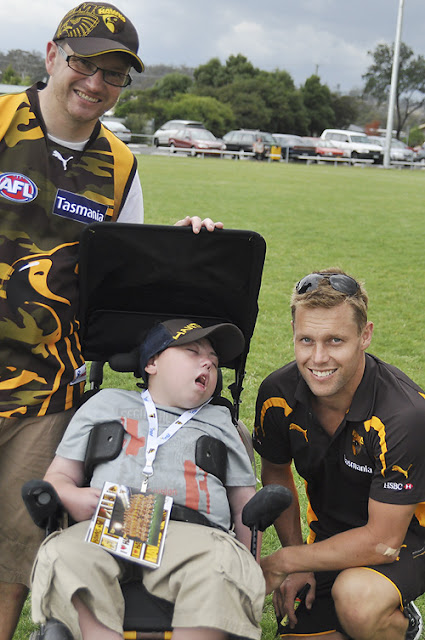 It was a nice (and very hot!) afternoon, and fun to get back into stalking the Hawks for another year.  I'm sure it's the first of many times that we will see them this week and year! Bring on footy season! :)
Posted by The Kings at 23:46