"As long as they are healthy"

Tonight I went grocery shopping and had the usual conversation at the checkout with the checkout chick...'how was your day?', 'what have you been up to?'...blah, blah, blah.   She noticed I was buying things that were obviously for a child and said 'how's your little one?' and I said 'he's good, but I've actually got four kids'.

She looked surprised and then asks 'so have you got two of each, or three of one and one of another?'. I laughed and said 'no four boys' to which she just about fell over and then made a comment that I hear so often 'are you going to have another one and try for a girl?'.  It makes me laugh a lot as I'm actually so happy to have four boys and can't even imagine having a girl or even wanting one.

She then made a comment that I also hear quite a lot ...'oh well, as long as they are healthy hey?'

I just smiled and said 'yep' as I really didn't want to embarrass her or make her feel awkward by telling her that I had a son who was disabled.   I know people mean well when they make the comment 'as long as they are healthy' but to be honest, even when they aren't healthy you love them, and I can't say 'even more' as I don't love Noah any more than I love my other boys, but I just love him in a different way - probably more deeply is a better way to explain it.  Having Noah makes you realise know how precious every day is, and he teaches you so much and makes you want to be a better person. 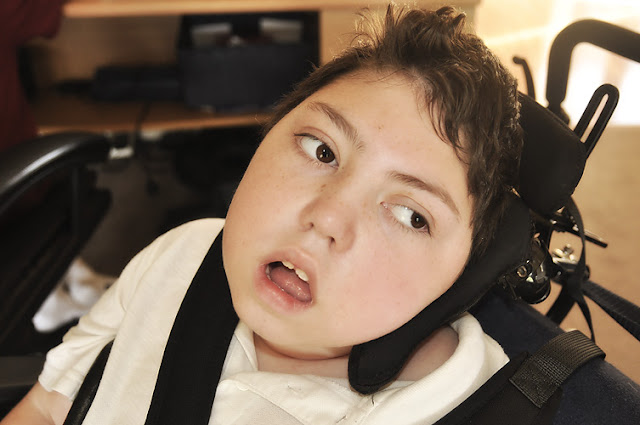 I know so many people who are wishing that their kids who weren't particularly 'healthy' were still with them right now, or others who haven't been able to have kids at all who would love to be able to love a little one - healthy or not, and lots of people like us who have a child who isn't as healthy as we hoped and dreamt they would be like, but love them so much and probably even more so because of who they are and what they teach us and others.

Having Noah in our lives has brought many wonderful people into our lives as well.  People who are so kind and generous, and without having Noah we never would have met them.

I know that the girl meant nothing by it, but hopefully one day people will see that having any child, healthy or not is a blessing in your life.  Yep it's tough and some days (or weeks) it sucks big time, but if I had the choice I wouldn't go back and change things.  I know that without Noah our boys wouldn't be who they are today, and I'm so glad that they have learnt things that they couldn't have otherwise, if they didn't have Noah as their brother.
Posted by The Kings at 22:20