Since Jay was old enough to get a casual job, I have been encouraging (nagging!) him to apply for different jobs and go out and drop off his resume. He wasn't really keen when he was 14, and it didn't feel like it was very long since Aaron passed away (it still doesn't!) so I didn't nag him too much, but left it for a bit.

He was very picky about what kind of work he wanted - saying that he didn't want to work at a fast food store, but preferred to work at a supermarket or another retail place.  I kept reminding him that often you have to start somewhere to get to where you really want to be, and I'm sure that he's very sick of all my 'when I was way younger than you I was already working and had two jobs by the time I was your age!'.

Living on a flower farm and having uncles who also had flower farms, meant that nights after school, weekends and school holidays were full of hours of planting, picking and bunching hundreds and hundreds of flowers.  It wasn't easy work, but it taught me how to work hard and I appreciated my other jobs after that! My second job was working at a roadhouse/service station which included pumping petrol, preparing food and serving customers.

Other jobs I've had since then include being a nanny (while traveling the USA with my Uncle and Auntie), a child care worker, a child support worker at a women's shelter, receptionist, teacher, then a teacher aid and a teacher again.

I knew how good it was having money as a teenager, and not having to rely on Mum and Dad if I wanted to buy clothes or other things.  Over the past year Jay has been keen to buy different things that he's seen in town. I've actually enjoyed rubbing it into him about how good it would be to have his own money to buy want he's wanted. Every time we were in town he would hear me saying 'if you had a job you could buy that!'.  Jay applied at places online, but was never really serious about getting a job.  I kept telling him that I was worried that he had left things too late, and was worried that he was getting too old to get a casual job somewhere.

A few months ago Jay came home from school and told me that his friend Sophie works at McDonalds and told him it wasn't a bad place to work. I told him that I agreed and had heard a lot of good things about working there - that it was very flexible, that the pay was pretty good, and that they had really good training.  I knew because he brought it up with me, that it meant he was coming around to the idea of working at a fast food shop.   I suggested he apply online, but he told me to not get too excited as he wasn't saying he wanted to apply just yet.

It only took a few weeks of encouraging (nagging again!) and he finally agreed to apply. He actually has a few friends who work there, and all of them told him that it wasn't a bad place to work, plus the idea of having his own money finally brought him around to applying.

He applied at a couple of different Maccas a few months ago, but didn't have any luck the first time, so he applied again a month and a half later.  One night I was cooking tea and he came into the kitchen and just casually said 'so yeah, I have an interview at Maccas'.  I was so excited but he was very laid back about it! I think I was a lot more nervous and excited about it than he was!

He booked the interview which was about 5 days later and I was so nervous when I dropped him off. He said he was nervous, but didn't seem like he was. I kept telling him to 'smile, be friendly, act confident, be yourself' and he just kept saying 'I know Mum! I know what to do'.

The interview was at Maccas and I just sat in the car and waited for him.  It was very short and sweet and he came out and said he thought he did okay and that he may find out that night.  A couple of hours later, he got an email to say he got the job! I was so excited for him.

Over the next week he had to complete some online training modules, before going to an orientation to get his uniform and he was scheduled to do few training shifts a week for three weeks.   You actually have to wear your regular clothes to work, and get changed at work but I was keen to see him in his uniform when he got it, so he tried it on for me. 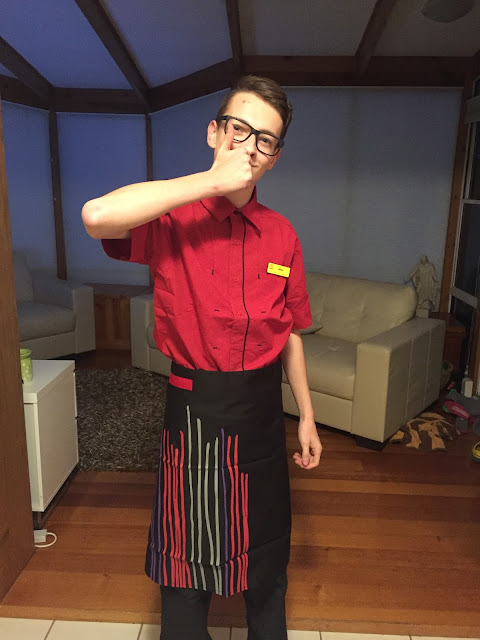 Apparently this is what all the cool kids do now - put their thumb up in front of their faces! I made him move it slightly for a pic, and he wasn't impressed :) 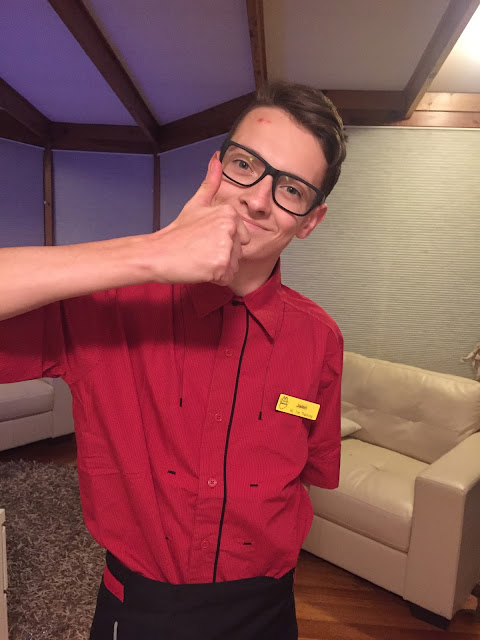 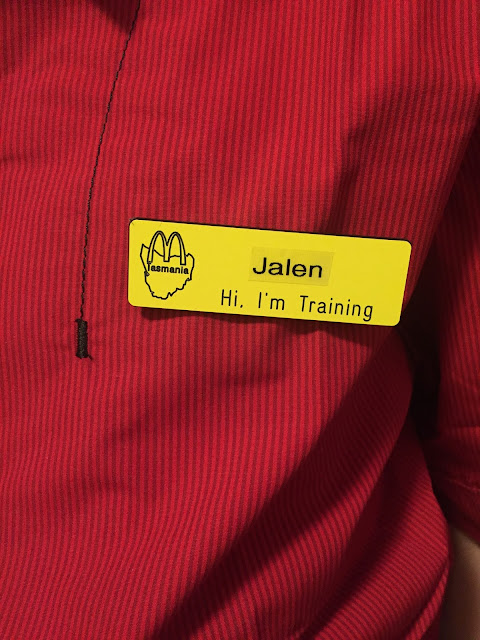 At his interview he was asked why he wanted to work at Maccas. He said he had been told by friends that it was a good place to work, that the money wouldn't be bad, and that he knew that Maccas was a great support people in the community through things such as Ronald McDonald House, and that we had experienced that firsthand as a family (or something along those lines).    This was the packaging for his work shirt. 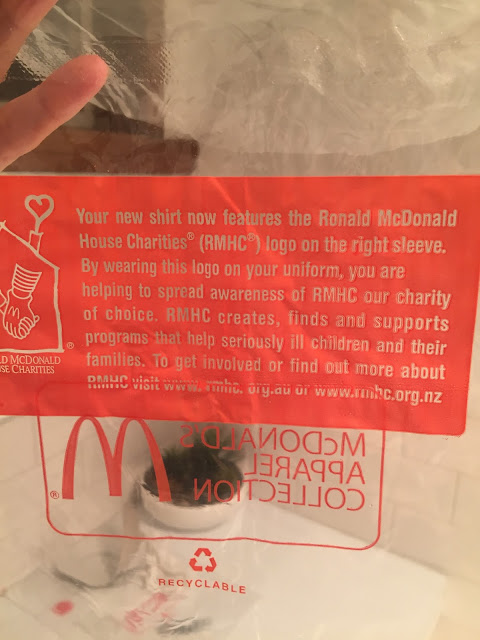 I'm lucky that the Maccas that he's working at is very close to home, so it's not too much of a pain to drop him off and pick him up, but I'm sure the novelty will wear off quickly. 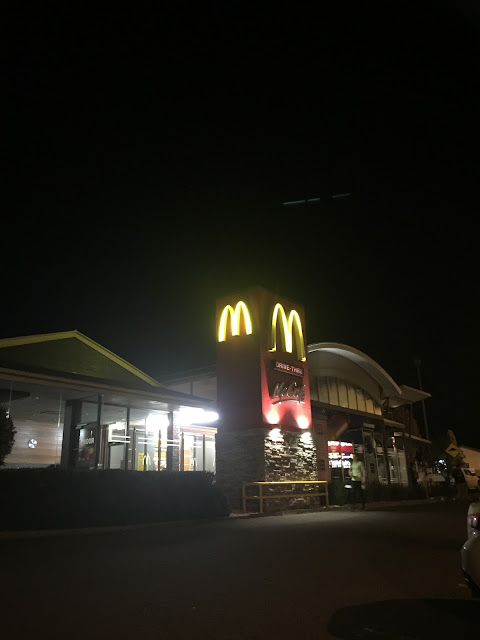 Jay has now done 5 training shifts and still has some more to go, but so far he said it's been going well. He said all of his trainers have been really nice and he cracked me up when he said 'kids are awesome hey Mum!?'.  It made me laugh as he always tells me he hates kids (probably because he's so much older than his brothers and cousins and it's a pain when they have their friends around and there's lots of noise).  I asked him why he said that and he told me two cute kids came in and ordered from him and he kept saying how awesome they were.

This was the view at drop off last night. We've been getting some beautiful sunsets lately. 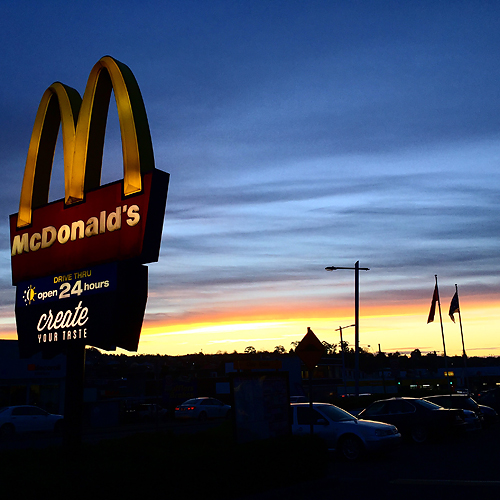 Tonight was our busy  night with both Harri and Kobe having soccer training.  It always means we have a late tea, and the boys are always in bed late on Wednesday nights.  Tonight Jay was working and Harri was at soccer training, so it was just Kobe and I having tea together. Kobe was so funny as he said how quiet it was and said he should sing 'all by myself!'. I told him that's what it's going to be like in about 10 years when both Jay and Harri have moved out of home - that it'll just be the two of us. He wasn't very keen on that idea!

Jay had warned us all week not to come in during his first few shifts, as he was nervous and just learning and didn't want to have the stress of us watching him.  I figured that he may be okay with us coming in tonight, so we went in before his shift finished to get a special treat for dessert. He cracked me up as he acted like he didn't even know us and just took Kobe's order :)   Harri obviously thinks it's pretty awesome that Jay is serving him (and yes we were being bogans and let Kobe wear his pyjamas to Maccas! It was past his bedtime, and I was keen for him to get into bed as soon as we got home :) 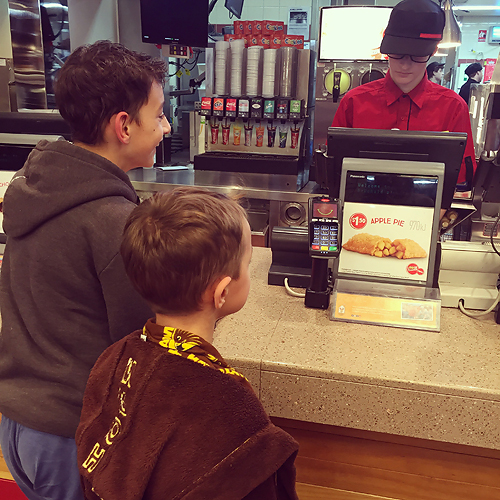 Jay is enjoying the discounted Maccas and is looking forward to his first pay.  I think once he's used to it all and not so nervous about knowing everything, he will be glad that he finally has a job.  We can't stop thinking about how awesome Aaron would think that he's working at Maccas.  When I met him I couldn't believe that a 20 year old could like Maccas so much!  No doubt he pulled some strings to get Jay working in his favourite place ever.
Posted by The Kings at 22:10