Even though I've blogged for a long time, I'm really not a professional blogger like lots of others I see as I hardly ever use my good camera anymore, and when I take photos on my phone it's just to capture the moment. I often regret it when I look at the quality of my phone photos compared to the ones I get on my camera, but I don't take photos thinking that I'm going to blog them.

My blog has always just been a family journal and I often get emails from companies wanting me to promote things on my blog, but I'm glad that I've always just kept it as a journal.  I know that if I made money from blogging or had received sponsorship for posting about things, then it wouldn't really be my blog. I would then feel like I had to talk about things I really didn't want to talk about, or would feel pressured to post more often.

There are times though when I feel like I no longer want to continue with my blog but then get anxious when I think in years to come I won't have our memories documented, as it's such a great way to just keep our memories in the one place.  I think because I use Instagram so much now, that I don't think about blogging as well, as Instagram is such an easy and quick way to document and keep memories.

There's nothing worse than when I'm trying to take a photo on my phone and I get the message 'Cannot take photos, there is not enough storage'.  I recently downloaded all my photos off my phone to free up some space, and saw lots of photos that I don't think I have blogged about, so will do a quick post to make sure I have them on here.

At the beginning of the school year I was asked by Aaron's old work colleague Fiona to speak in her year 11 and 12 Child Studies class. She used to get me to come to every year with Noah and after Noah passed away to talk to her Child Studies class, and when she moved from working at Aaron's old school I didn't think it would happen anymore, so it was nice to go again and talk about Noah, and what it was like to have a child with a disability. 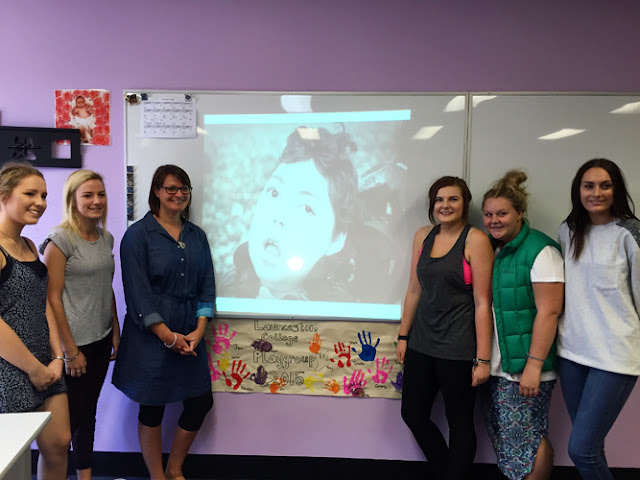 Looking back at our summer photos makes me excited for the warmer weather again.   We spent lots of time with my cousin Tim and his wife Helene and their family over the summer, and I can't wait for lots of walks, ice creams, scooter rides and swims again. 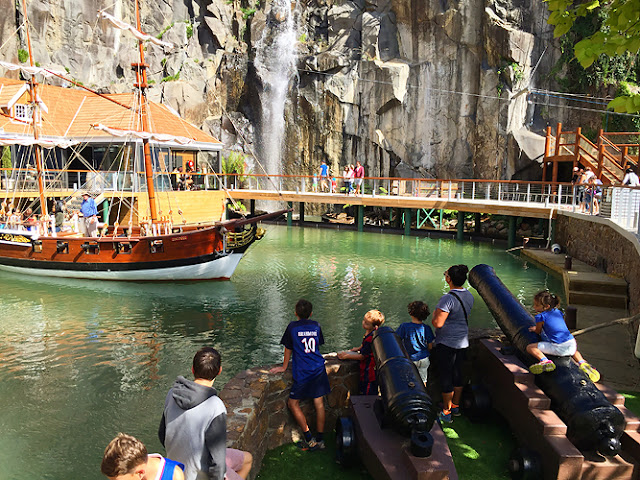 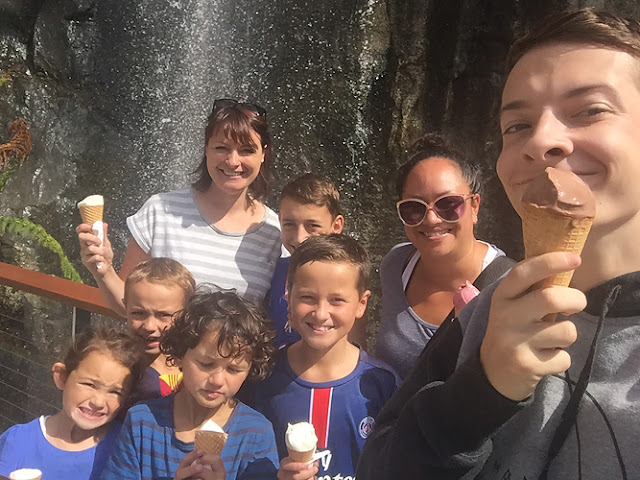 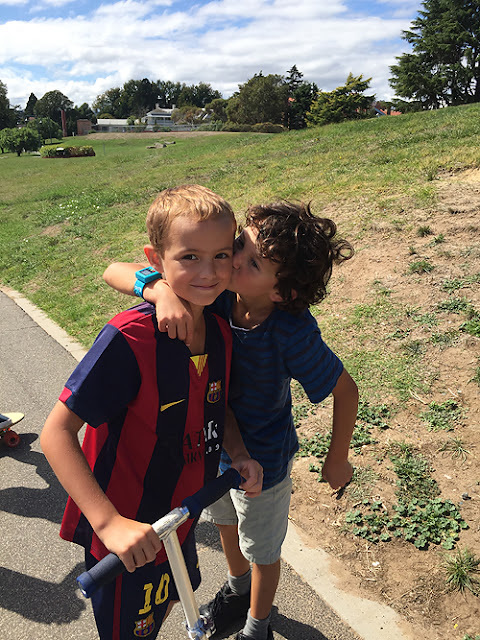 I had to ring my brother Chrish tonight as I couldn't even remember when these photos were taken.  After we went camping at Easter he came and stayed with us for a night before he headed home. The weather was still quite nice so we went for a walk one night at the Gorge with Tim and Helene as well.  I think it must be time for another trip to Tassie Chrish! 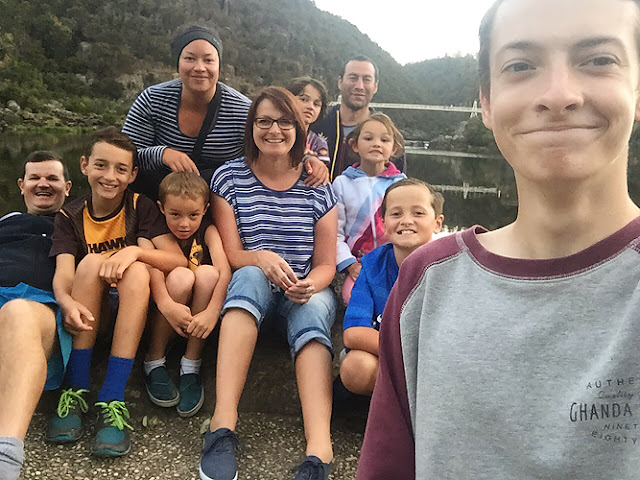 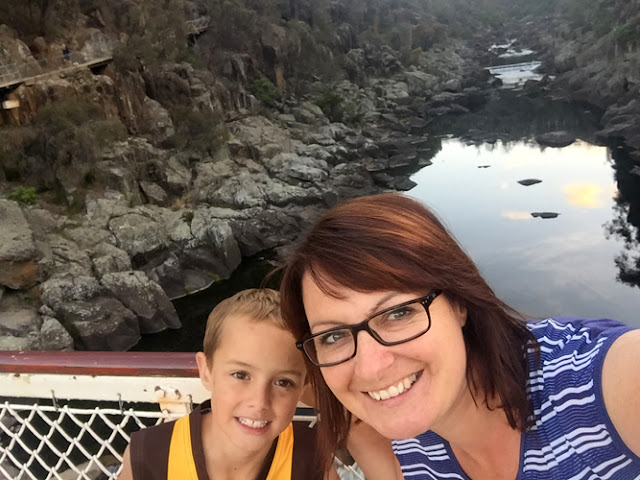 Jay has had a busy year at school.  He did really well in a production that he was in with his drama class - Much Ado About Nothing. 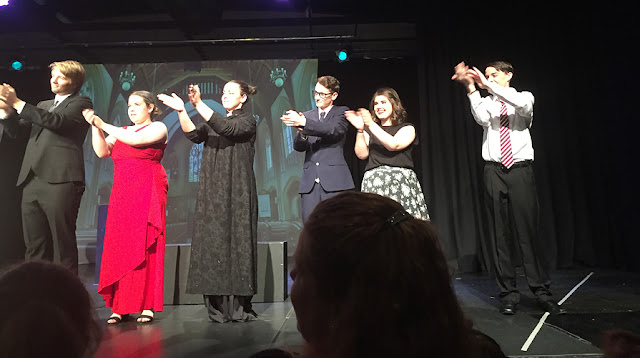 Last school holidays Jay, Kobe and I went to the snow one day without Harri. He had just gone to a sleepover and doesn't cope at all with the lack of sleep, so we left him behind to catch up on some sleep as he kept saying he didn't want to go to the snow anyway.  Not long after there was a lot more snow around Tassie again and because we didn't have soccer one weekend, I told Kobe and Harri to get ready quickly and we jumped in the car to find some snow (Jay had to work).

Because you usually have to go to the mountains or highlands to find snow in Tassie, it was awesome seeing the snow in the paddocks as we drove along the highway. 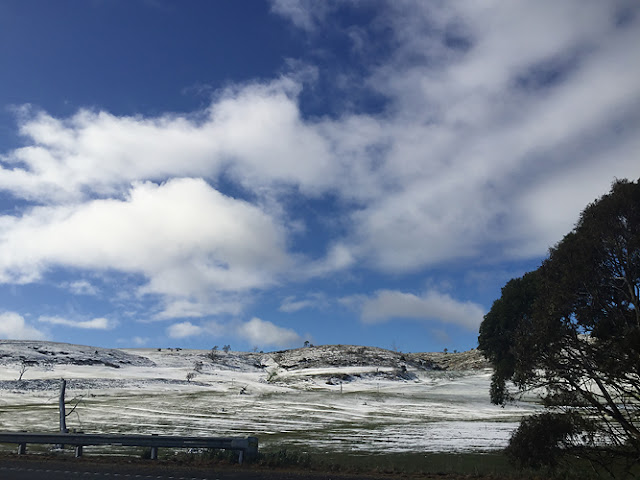 There wasn't very much, but it was enough for us to get excited about and have a little play in. 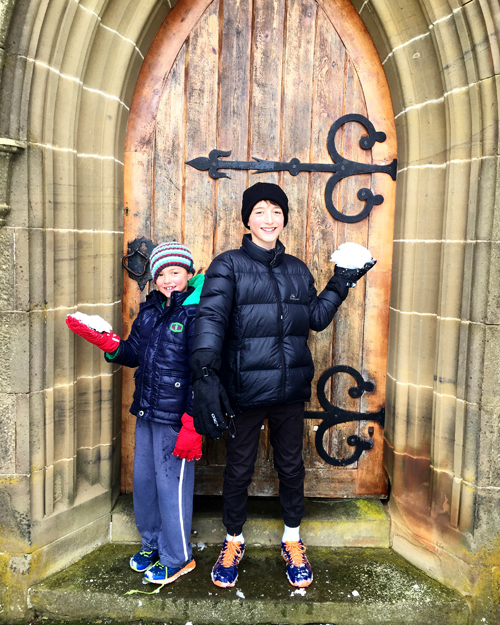 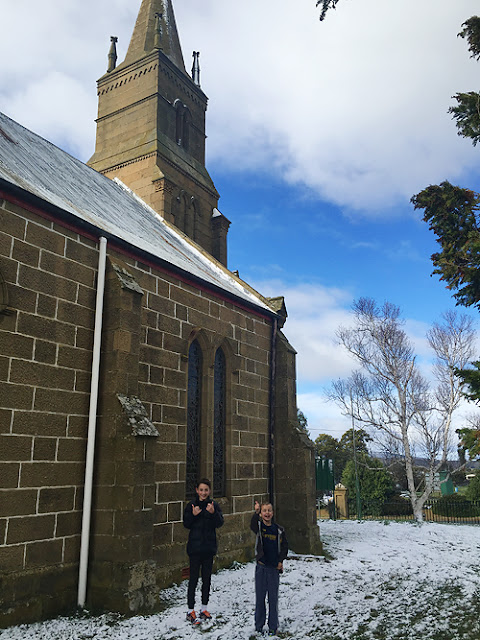 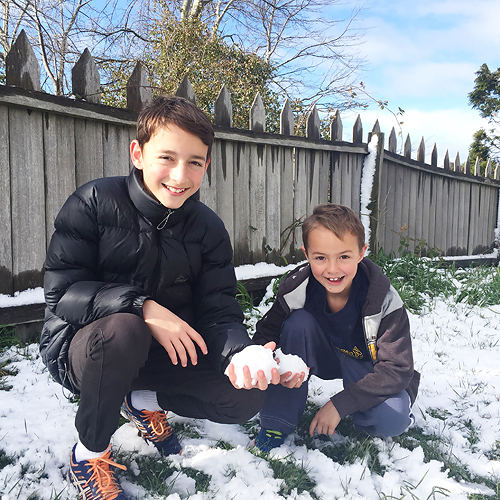 The boys had never seen it actually snow before, so it was very exciting when it snowed on us. 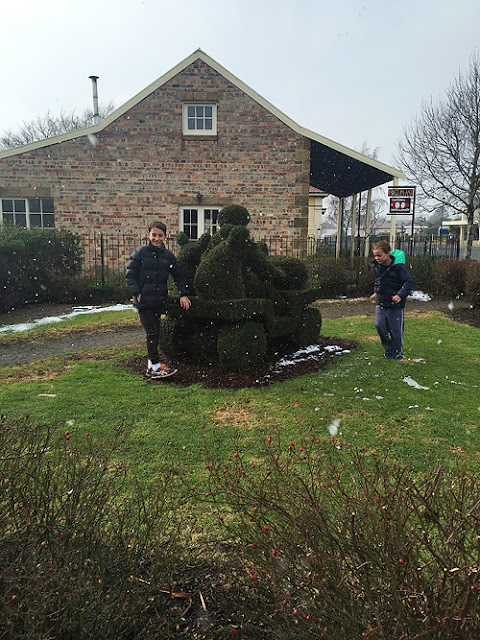 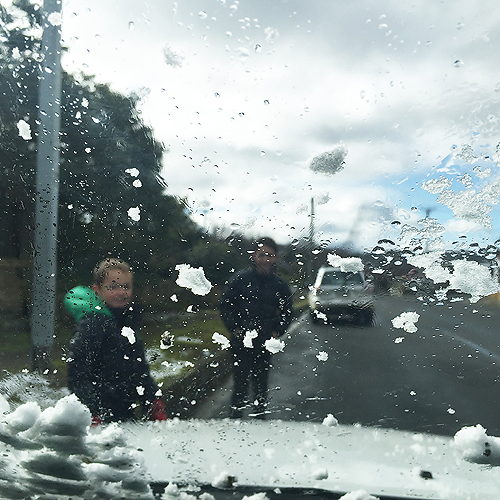 We have loved going along to live AFL games again this year and watching Hawthorn play. We always go along with my Mum and take Aaron's Dad and often my cousin Tim comes if he's not working.   It was fun to catch up with our friend's Sarah and Joe and her brother and sister in law after one of the games. 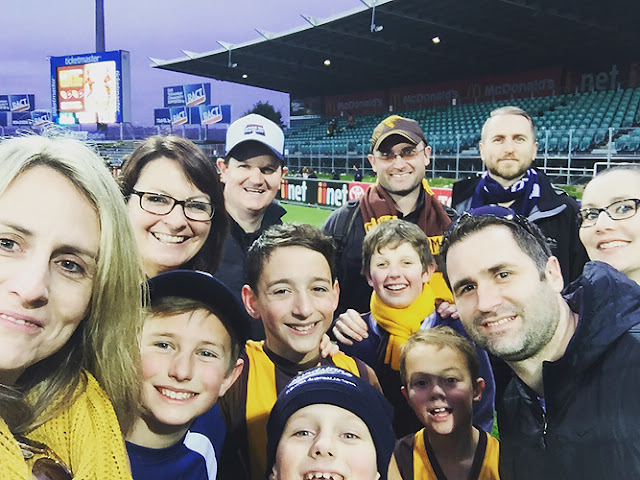 That night we drove home via the Town Hall as I had heard that they were lighting it up in the colours of the Afghan flag to show support to our local Hazara community as 80 people were killed in Afghanistan by a suicide bomber.  I had seen one of my old EAL families during the week who are Afghans and they had told me about it and said 'very sad' and asked me if I would go and see their flag lit up. I promised them I would, and tried to explain to the boys about how much we take for granted here.

We were very excited when the summer Olympics were on - especially Kobe! He reminded me so much of Aaron as he also loved the Olympics. Kobe woke up at 6 am on the morning of the Olympics to watch the opening ceremony. I posted a photo of him in my bed watching it on Facebook or Instagram and our friend Andi commented that she was also up early to to watch and was just having some Vegemite on toast. I jokingly said she could drop some off at our door for us and 15 minutes later she sent me a text to say it was there. I totally thought she was joking and didn't go down, and she sent me another text telling me she was serious - she had left Vegemite on toast and hot Milo at our front door! It cracked us up so much and made our morning! 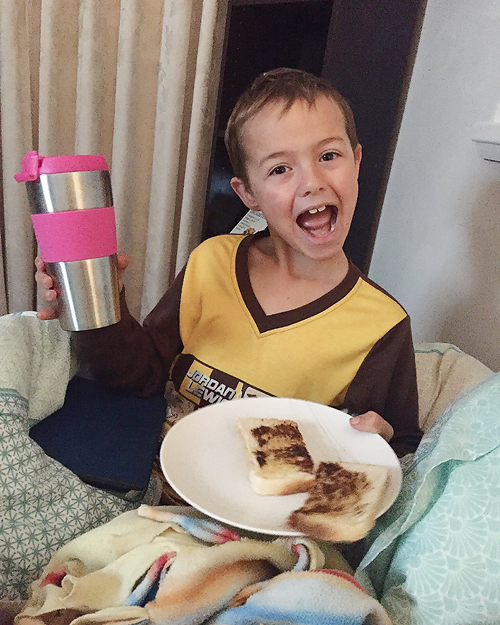 Not long ago we were excited to catch up with two visitors from the USA.  Chelsea and Caroline were both missionaries for our church and were in our area for a while. They are now home and came and stayed at our friend's Nettie and Kelvin's home while they caught up with people and did a bit of sight seeing.  Nettie had an open home so people could catch up with them. 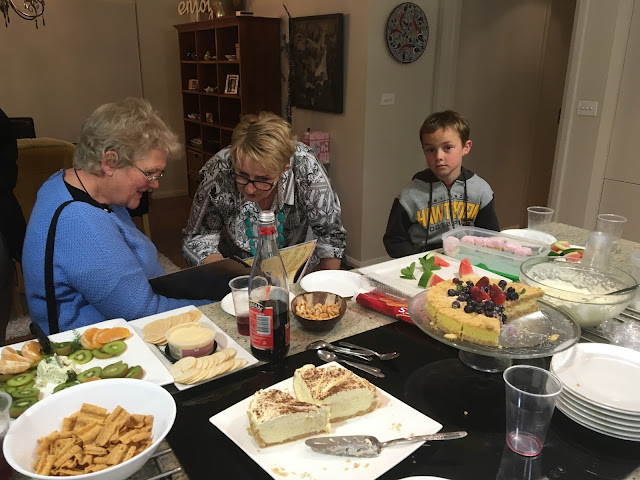 It was so fun to see them again and it was so different now they aren't missionaries. 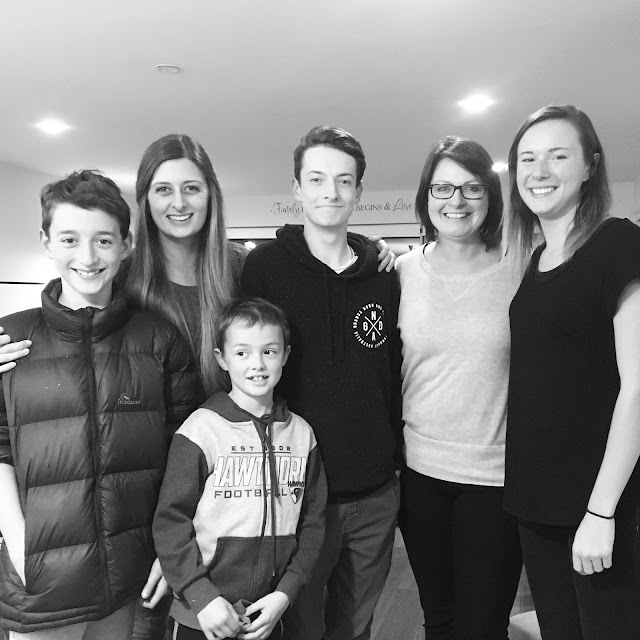 Kobe and Harri were so excited to get everyone to dab for a photo.  Jalen was embarrassed that he had to lower his standard to be a part of it too :) 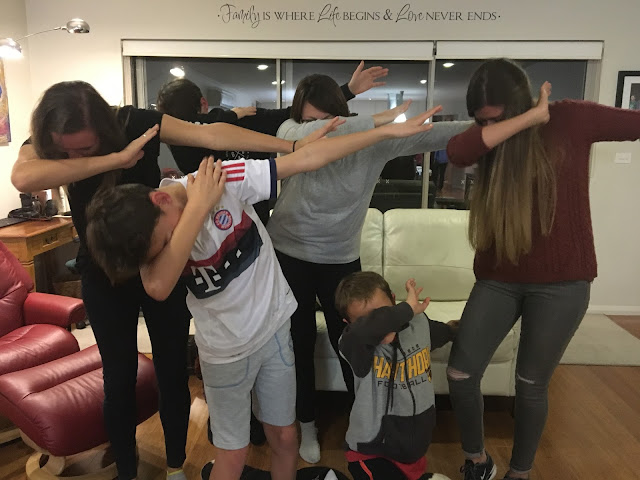 I can't believe how fast this year is going! I can't believe that it is October already. Even though I don't blog like I used to and I know it's not really great reading for anyone else, it's still nice to have all our memories in one spot.
Posted by The Kings at 22:05