Better than the footy

As a kid and all through my teenage years, I played basketball, and loved it.  I don't want to brag (okay, maybe I do just a little ;) but I used to be okay back in the day.   My brothers used to watch some of my games, and I remember them calling out 'fluke!!' or 'go Jordan!' as I used to get a lot of long shots in.  I reminded them that if I was aiming for the shot and it went in, it was obviously skill rather than a fluke, but they still love to tell my boys that I used to 'fluke it' back in the day.

When I met Aaron I loved that he loved basketball as much as I did, and when we were first married we used to play in a league every week, and for fun we would go and just shoot around together on the weekend or after work.   I continued to play basketball when the boys were younger, but stopped because I lost my enthusiasm for it.   I kind of wish now that I kept it up as I still think that basketball is the best sport to play.

Harri has always been obsessed with footy and I have just learnt to go with it instead of resisting it, and actually ended up loving footy myself.   I never imagined he would love anything as much as he loves footy, but always suggested to him that playing basketball would be fun.

After Aaron passed away he did Auskick for one more year, but then decided to give it up, and didn't want to take up any other sports.  Last year I kept suggesting that basketball is fun, but he wasn't keen until a couple of months ago.   At school a lot of the kids have started to play basketball at lunch time and Harri has been joining in.

One night he came home from school and said that he thought he would like to play basketball, and it made my week!  I was so excited and rang up straight away to see what nights his age group trained and played.   He couldn't wait for his first training.  He has never played it before, except for at school but he is so natural with sport and is picking it up really quickly. 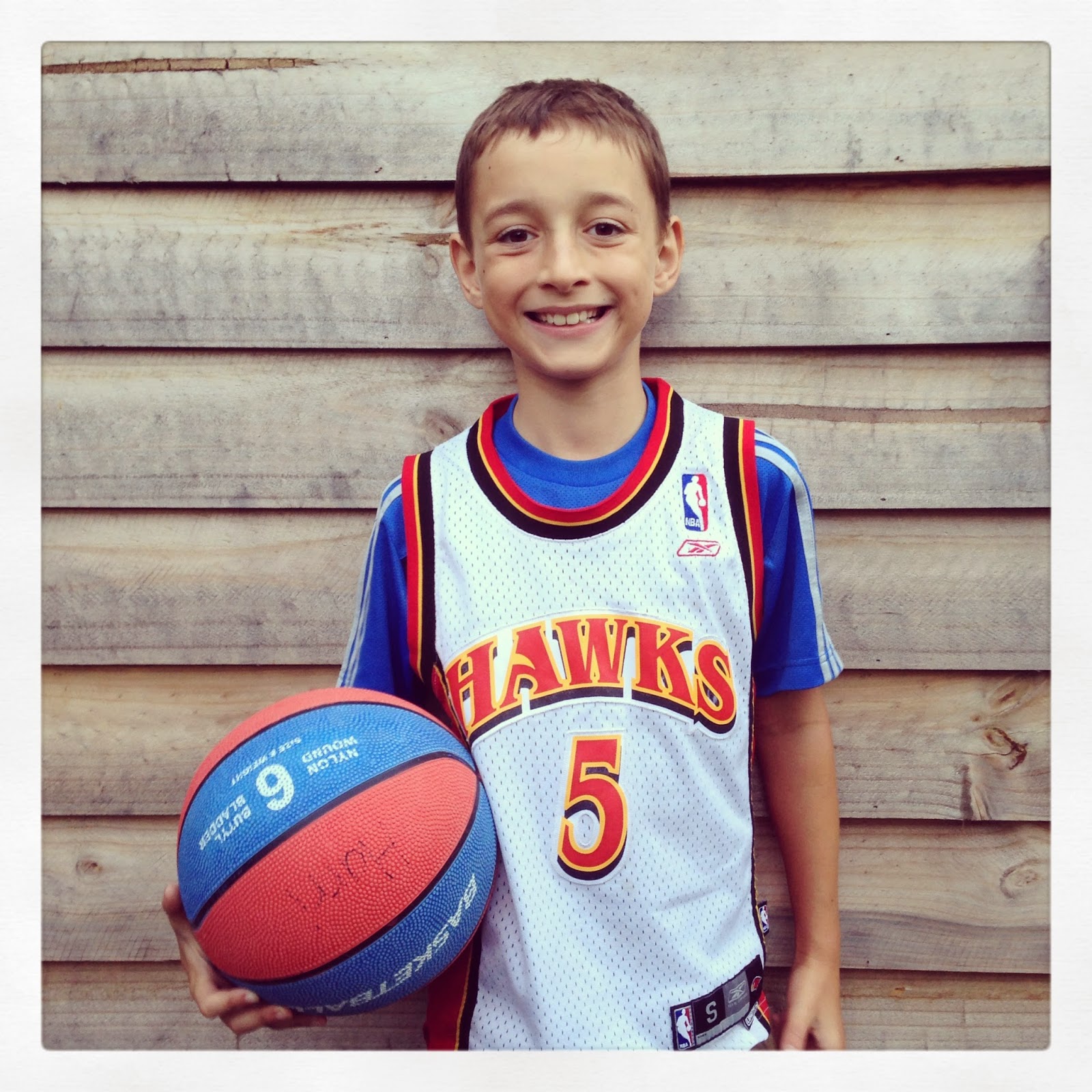 The best thing is that there are four other kids from his school who play in the same league, so he has been put into a team with them.  It's so nice for him to play with kids he knows and he hangs out all week for his game.  I love that the league is very casual, and is mostly about teaching kids how to play, and it doesn't put any pressure on them.  They don't even put the scores up on the board, so it takes a lot of the pressure off and I can see that Harri is just loving playing, rather than wondering what the score is.

He's only played a couple of games but is already obsessed with it.  He is going really well and learning the rules quickly - last week he got four goals.  He's a great team player and is keen to pass it to his team mates, and just loves being a part of a team.  He always looks over to me to see if I have any advice for him, and nods his head and smiles as he's running up the court.

He's desperate for all of us to go and watch him every week, and I'm trying to remind Jay how much it would mean to him for him to go and watch every couple of weeks.  Jay would prefer to have a quiet hour at home, but he knows how much it means to him and he has promised he will watch a lot of his games. 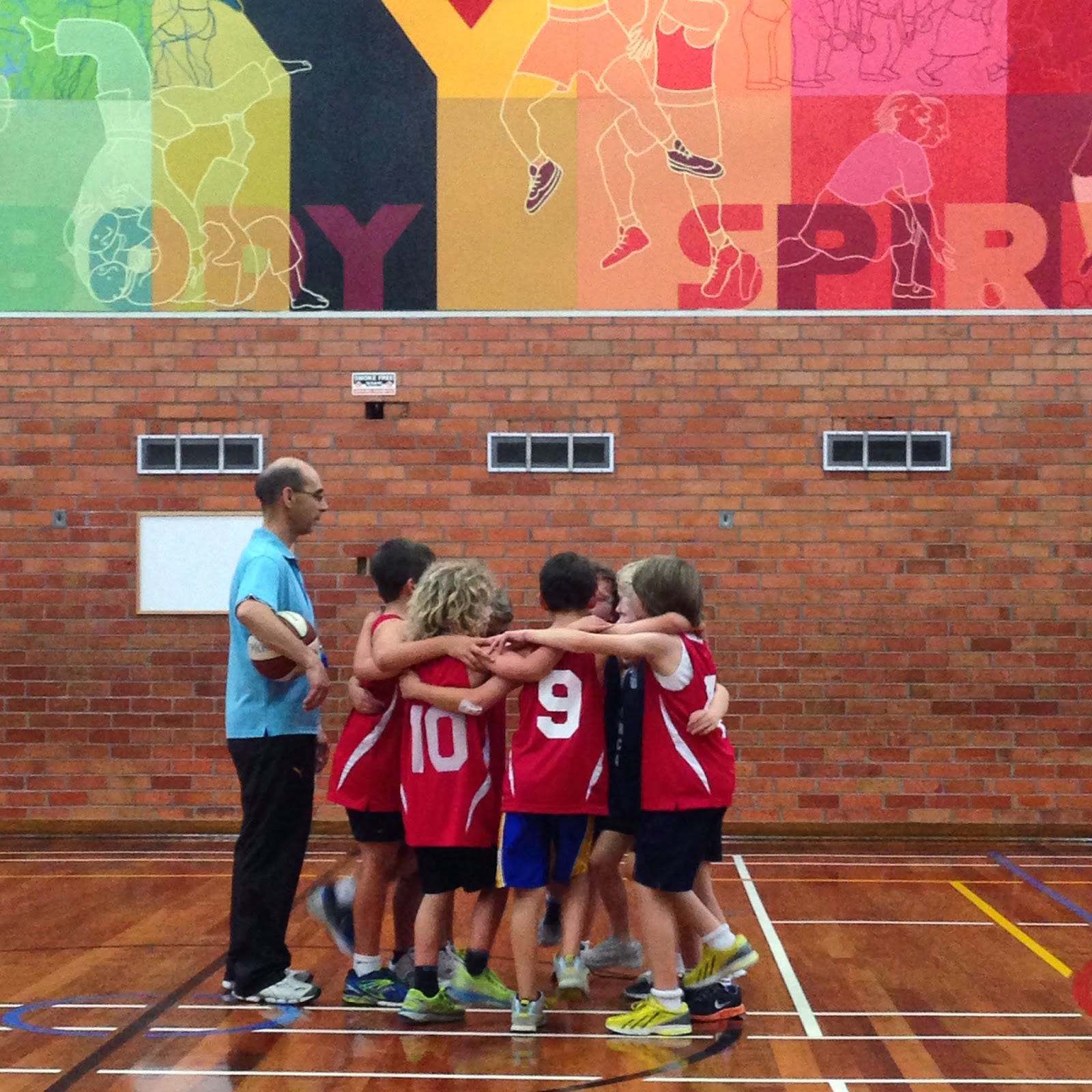 Harri told us this week that basketball is 'better than footy'.  I was shocked and loved rubbing it into him when I reminded him that I had told him a long time ago how fun it would be to play basketball.  I'm glad that he has found a sport that he loves so much, that he can play every week (and hopefully with a lot less injuries than footy).